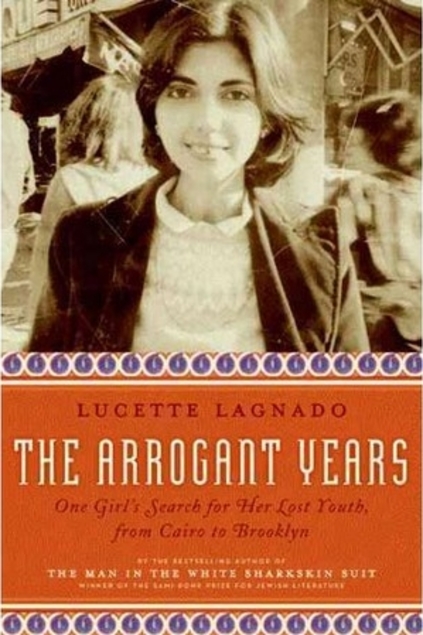 The Arrogant Years is a memoir of Lucette Lagnado, a journalist for the New York Post, who was born a Jew in Cairo, Egypt. I have to admit I thought most Jews left Egypt around the time of Moses, and apparently most Jews did, but there was a remnant who stayed or ended up there and survived until the mid 20th century. Lagnado's family descends from that remnant.

Lagnado begins the book with stories of her mother, Edith, a protected but bright young girl from Cairo who caught the eye of the influential Cattaui family. She enjoyed the privileged position as a teacher and librarian with the family until she met Lagnado's father, a rather sketchy character who insisted that his new wife quit her job. Several years and children later, during the Nasser dictatorship, their lives threatened by more and more restrictions, Lagnado's family left for Paris and eventually Brooklyn.

At this point the focus of the book changes from Edith to Lagnado herself. She spends quite a bit of time relating how she grew up in the middle of the women's liberation movement and how she tried to reconcile that with the strict separation of women and men in her local synagogue. This is followed with a recap of a medical crisis, her college years, her subsequent life as a journalist, and then her struggles as she tries to balance being a good daughter and a working woman with an elderly, disabled mother.

Lagnado ends the book by traveling the globe, reconnecting with the people of her earlier stories, and bringing the reader up to date on their lives. Part of the problem I found with the book was that there were so many of these minor characters, few of whom ever seemed described enough to make me distinguish among them, that the ending left me flat.

In doing some post-reading research I found that Lagnado had written an earlier memoir about her father and the family's exile from Egypt. It was at that point (and only at that point) that I realized that this book was  supposed to be a similar tribute to her mom. That did help me understand why certain stories were included that I had puzzled over and why I enjoyed the beginning and the part of the book where Lagnado hooks up with the Cattui family to document their fortunes since Cairo. Truth be told the stories about her mother were for the most part more interesting that than the stories that Lagnado wrote about herself. I think if she had concentrated more on her mother and less on herself, the whole book would have been more engaging.

That being said, I wonder now about the memoir she wrote about her father, The Man in the White Sharkskin Suit: A Jewish Family's Exodus from Old Cairo to the New World. Perhaps the stories in The Arrogant Years were weak because she had already told her story in the first book? Almost enough motivation to make me pick up the first book and find out. Almost.
Posted by Stephanie Pounds at 8:30 PM