Daisy, Daisy, All In a Book Vase True

Today has been a stormy one at our house. At 4 p.m. is was as dark as 8 p.m., but here's something to brighten a day. 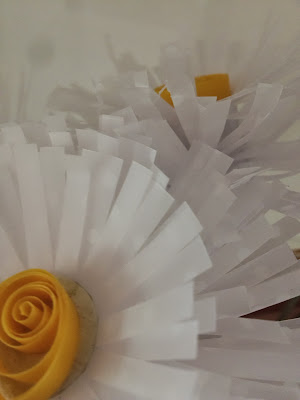 And even better? Daisies in a bright gold book vase! 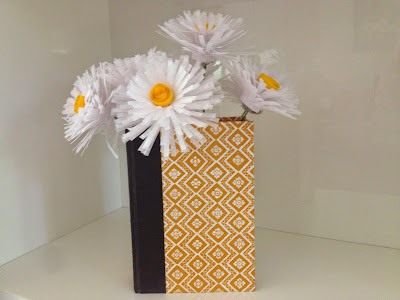 I made these daisies as a commission for a birthday present. 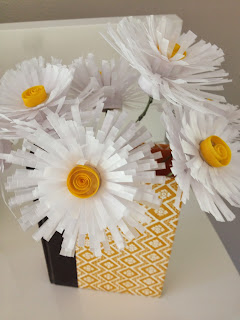 Here are what daisies look like when you take a picture with a Olloclip Fisheye lens. 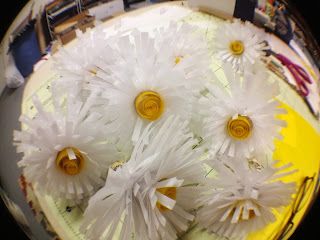 These daisies are another product of the Paper Blooms book. I can't tell you how much I'm enjoying that book. 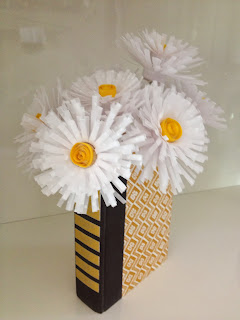 As much as I'm enjoying these daisies.

Posted by Stephanie Pounds at 5:21 PM No comments:

In a recent season of the TV show Survivor, contestants stood in shoulder-deep water in the Pacific Ocean. Above their heads was a railing, and as the tide slowly came in they went from chatting amiably with each other to sputtering pitifully, their noses pressed as far through the railing as nature would allow, trying to grab that last bit of air that they could. As I read The Handmaid's Tale, that same deep sense of claustrophobia crept over me. That sudden panic when you realize that everything was just fine a little bit ago, but how in the hell did I get here and will I ever be able to get out?

The unnamed handmaid in this case lives in a dystopian future where religious fundamentalists have taken over the United States. Infertility is the norm, so the powers that be enforce a strict interpretation of the Old Testament and conscript young women who may have a chance at being fertile into becoming the handmaids of powerful leaders. Their sole purpose is to bring a baby into the world, and their life is limited to only that.

The fact that I felt like I was choking from lack of air most of the time I read this book is testament to Margaret Atwood's fine writing and Clare Dane's masterful narration. This one has been tagged by editors as an Audible Essential, and I agree. Really good book, highly recommended.
Posted by Stephanie Pounds at 8:46 PM No comments:

I opened this book, read the first few pages, closed it and then went to get a pencil. This, I knew, was going to be one of those books where I wanted to do a lot of underlining and note-taking.

The Great Dissent follows the path that Oliver Wendell Holmes took from 1918 to 1919 as he wrestled with the issue of the kinds of speech the government protects and the kinds that it can prosecute. Author Thomas Healy does a masterful job of taking someone with a novice understanding of the points of view involved (like me!) and explaining the nuances of the differences. Through careful analysis of legal opinions and letters to and from colleagues, Healy exposes the arguments that Holmes considered as his beliefs transformed from the Constitution being society's protector to the individual's protector.


The story weaves its way through the many free speech cases that reached the Supreme Court as a result of the Espionage and Sedition Acts enacted during the course of the First World War, and as much a part of the story as Holmes' journey is the story of his friends and colleagues who revered their old friend, but who had different opinions on free speech and wanted to sway Holmes to their way of thinking as he worked his way through the docket.


One often believes that the way things are is the way things have always been and I always find it fascinating when I run up against evidence where that's not the case. So it was with this book as Healy chronicled the interpretation of the First Amendment over the years and the cases that determined the generally understood meaning of the Amendment at that time. Good history all around!

I also enjoyed the serious, yet congenial back and forth that Holmes and his friends employed as they presented their arguments to each other. They all seemed to genuinely like each other while often having diametrically opposed opinions. It made me once again bemoan the present state of disagreement where two sides tend not to engage each other at all, but engage with their like-minded compatriots in calling the other side names. And Holmes' willingness to listen to opposing opinions and alter his on point of view when he felt it needed to be altered was also admirable.

The Great Dissent is a fine, engaging book on a dense subject that still is accessible to the layman. Highly recommended!
Posted by Stephanie Pounds at 6:51 AM 1 comment: