Those of us who live in the swampy, piney woods realize that occasionally one has to deal with the pesky varmint who wants to take up residence in one's house. I thought I had insulated myself fairly well from that circumstance by specifying in my wedding vows that Captain America would be solely responsible for taking out the trash and removing said varmints from our home. Being the ingenue that I was at marriage, however, I did not take into account that Captain America's occupation would require that he spend at least half of each week away from me and said varmints.

Although I still make an especially loud request for him to exterminate every giant, flying cockroach that seems to delight in greeting me when I open the bathroom door first thing in the morning, I have learned to be fairly resourceful in removing said cockroaches when I am alone. (Interestingly, the decibel level when I make my request and when I must remove the cockroach myself is the same.)

In the past year, however, the varmints have gotten bigger and/or creepier and frankly, I have had it up to here with them trying to invade my house!

Case Study #2: The copperhead that I saw squiggle across the living room floor at 1 a.m. and then disappear into the darkness about a year ago. My next-door neighbor and personal hero, Carlos and his lovely wife Debbie, came over at 1:10 with boots and a shovel to lead the search and then came back the next night until we found the snake and sent him to snake heaven. (That's right, the snake lived in my house for 24 hours.)

Case Study #3: The pair of raccoons who recently chose my attic for their new starter home. One evening they came down from the attic into the garage and knocked a bag of cat food off of a countertop onto the floor. Captain America and I were watching TV at the time when we heard the big kaboom. My heart leapt to my throat until I realized that finally my knight in shining armor was home when varmints struck.
"There they are!" I exclaimed. "It's the raccoons."
Captain America carefully considered his options and then bravely responded, "Well, I don't know what you want me to do about it."

To his credit he bought a raccoon catcher the next day and then took them both to their new home in the woods when we caught them.

Which brings us to this past weekend. 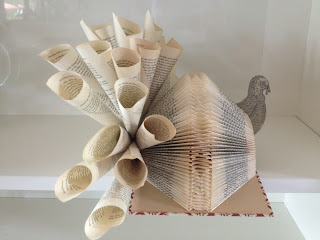 It needed the warm, rich hues of Thanksgiving. So I started looking around.

Which brings us to...
Case Study #4: Our TV room has a built in entertainment center with big lighted cubbies above the TV. I decided to see what the turkey looked like there. I pulled the ottoman close to the wall and climbed up and just as quickly jumped down. What was that in the cubby? My first impression was that it was a stick but with something on the end. Was it a snake head?

I took a deep breath climbed back on ottoman. The "stick" was in exactly the same position it had been in a minute ago. I was pretty sure whatever it was, it wasn't alive. I moved in a little closer and then I saw it was...a leg!

And when I say leg I mean A BIG HONKING, HAIRY, CLOVE-TOED LEG! 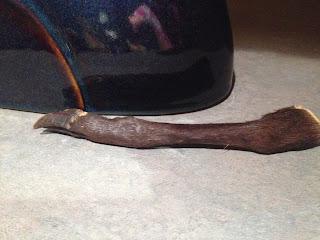 And then I realized that there was another leg in the back of the cubby. 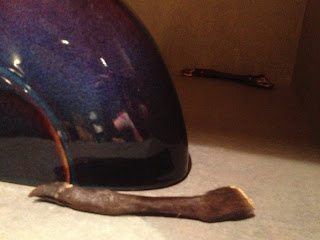 Worst of all, I have no idea how these legs got in the cubby in the first place. I know I didn't put them there. I pretty sure Captain America hasn't been sawing the legs off teeny-tiny deer. So now I am wondering if perhaps someone has put a voodoo curse on us. (Although life has been treating us pretty darn good recently so I am considering leaving them there.)

My nerves jangled, I hopped down from the ottoman and took the turkey into the living room, the one with lots and lots of light and windows that discourage varmints from making an appearance, or so I thought until I ran into

Case Study #5: As I reached down to position a table just so before taking a picture, I saw something scurry across the windowsill and then stop. I jumped back and then quickly realized it was a gecko.

Now normally I have nothing against geckos, they make funny insurance commercials and I see them frolic on my back porch all the time without raising my blood pressure one point, but this one had particularly bad timing as I was still reeling from the animal  parts in the cubby and so I screamed and the gecko, sensing my panic, jumped down and started to scamper across the floor which brought the pandemonium in my house to a whole new level until I realized that I was actually quite prepared for this moment. And that is when I introduced the gecko to my new cat.
Posted by Stephanie Pounds at 9:04 PM