I've always been partial to buckeyes. My grandfather used to give them to us all the time. He said they were good luck. I kept mine in my coat pocket, and good luck or not, it always served as a great worry stone. I would wear the thing shiny with my thumb as I stood in line somewhere or sat in a crowd watching a ball game. 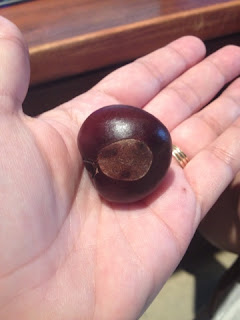 Even though my grandfather has been gone for many years, I still have my buckeye. Recently I ran into another kind of buckeye. The kind from Ohio. One of my friends asked me to create a book for her alma mater, Ohio State.

We checked out all the logos, trying to figure out which one would fold well, and finally decided on this one.


Then I folded the book, and it looked like this. 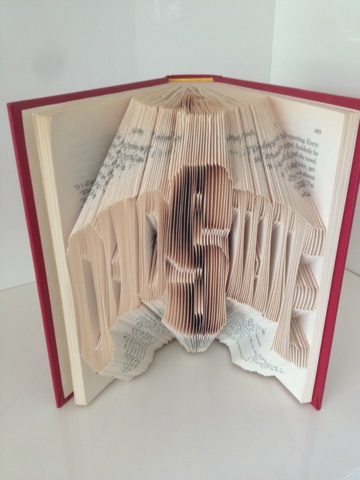 So not awful, but I didn't think it was very easy to read. Part of the reason is because none of the letters in the logo have any serifs, so the side of an H and and the capital I right next to it look a lot alike.

That being said, whenever I asked anyone what it said, they all said "Ohio State," so maybe it's better than I thought. Especially when you look at it from this hero angle.

Someone needs to set it on a high shelf.

So I offered to make a new book with a different logo. My friend thought about it a bit and then said "You know, one of the things Ohio State is known for is the band spelling the word, Ohio, in script across the football field. Could you make that in script?"

Could I? Again I went to the Internet first to see this phenomenon and found this. 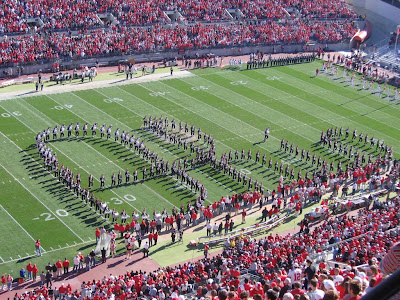 Next I went shopping for an extra big, red book. Um, I mean scarlet. I found just the ticket in the Friends of the Library bookstore. And (BONUS!) if my friend ever wants to unfold this beauty, she'll find 4,139 strange and fascinating facts about WWII.

Then a little folding and some gray endpapers later, and we ended up with this. 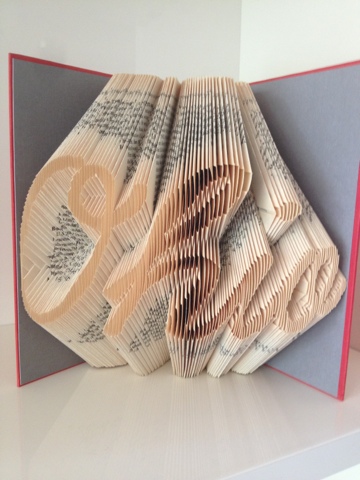 Now all it needs a little tuba hovering over the "i". Wonder how you fold that??
Posted by Stephanie Pounds at 1:55 PM