But I can't help it. I come from a family of bibliophiles. I also come from a family of lying, cheating thieves. Case in point. Tonight we met to celebrate Christmas--and to complete our annual book exchange, a no holds barred, take no prisoners game of Dirty Santa where all the gifts are books.

Here we are gathered around the book pile getting ready to start. 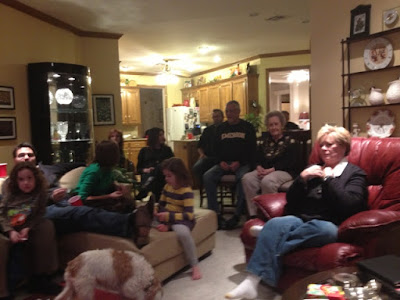 And we are not just bibliophiles, but geeky bibliophiles, to boot. Here are members of the family Skype-ing in from Houston, Dallas, and Baltimore in order to take part in the festivities. 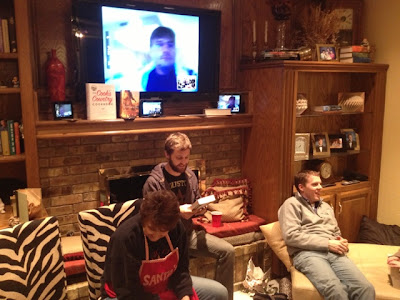 The rules work like this. You get to pick a book from the pile and open it or steal a book that someone else has already opened. It's a pretty good idea to pick a known quantity given the varying quality of the books in the pile. Case in point. Tonight What the Dog Saw and Sweet Tooth touched spines with The Bottecelli Secret and You Betcha. Stealing is often the best strategy.

Here is what I came away with. Heck yeah! 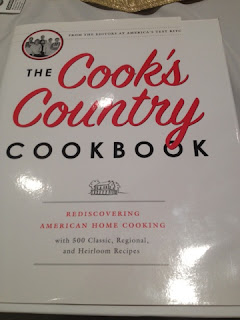 Also making its expected  appearance was the perennial favorite, Build and Repair With Concrete featuring Don Knotts. Each year the "winner" of this books gets to sign the inside cover and bring it back next year disguised as best they can. One year my cousin hollowed out the inside of an oversized children's book and hid the Concrete book inside just to throw us all off the scent. This year my uncle took it home, but I secretly think he enjoys reading it while it's at his house.

This year I decided to make a Glenda the Good Witch foil to the Wicked Witch of the West Concrete book, just in case there was anyone who is as challenged as I with making a dent in their books off the shelves list and was just looking for a little decoration.

I made another Read book. 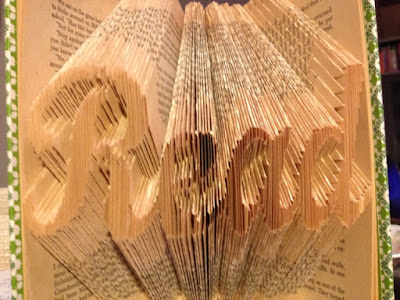 This one was rather challenging, though. The pages, though not the oldest I have folded, were definitely some of the most brittle, even more so than the Bounty book. The effect, however, was really kind of cool, I thought. The word was definitely not as smooth as other ones I've done, but the broken, imprecise folds gave it a neat texture, as if to say this book is truly vintage and has seen its share of years. 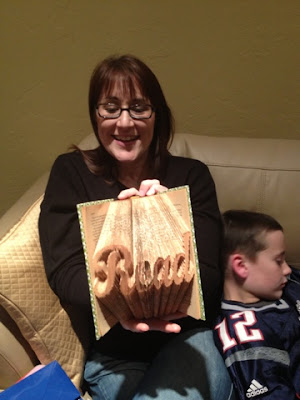 Just a lot of love.
Posted by Stephanie Pounds at 10:33 PM