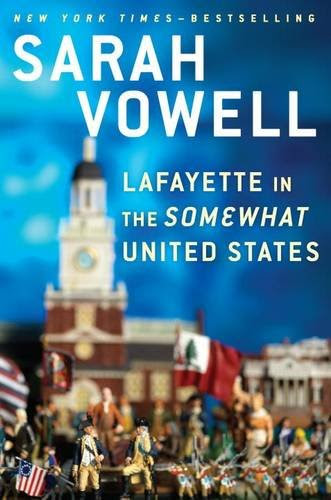 I think it's fair to say that to this frustrated history major now working in corporate America, Sarah Vowell is a heroine. To be able to drive around the U.S. with your best friends and favorite family and visit historic sites, both famous and obscure and then write about them... ACK! Why did I give up so early?!?

Not only do I love her life, I love Sarah's style--observant, sarcastic, and insightful--all delivered with a healthy dose of humor. This is the third Sarah Vowell book that I've read and each of them has presented a story that I thought I knew--or should have known--in way that proved I only knew the bullet points or, in some cases, the myth.

In the case of Lafayette in the Somewhat United States Vowell takes on the part of the French in the American Revolution through the life of its most famous Frenchman, General Lafayette. It's hard for me to even write that term "General" because the dude was only 19-years-old when he received that rank. Apparently, all that fighting the French and English had been doing for centuries and the personal toll it took on Lafayette (his father was killed in battle early in Lafayette's life) made Frenchmen in general and Lafayette in particular much better at the art of war than the typical American. So the young commission.

He proved himself a loyal and able leader and endeared himself to the Americans so much so that when he returned to the United States nearly 30 years after the end of the war (and after having endured a harrowing time back home during the French Revolution), he was met with hugs by the Founding Fathers. Literally.

So I knew that the French backed us during the Revolution and I knew that Lafayette was one of them, but I really didn't understand how decisive the French help was. Without them there wouldn't have been us. Vowell does a really good job of showing me that as she took me from walks through the mansions of pre-revolutionary France to tours of US battlefields to an interview with George Washington in Colonial Williamsburg. I learned a lot.

All that being said, as much as I liked unlearning all that stuff I thought I knew before, I missed the funny Sarah. There were a few places in this book where I guffawed, but mostly she seemed more ticked off than in her other books. I'm not sure if that's a sign of the times, the subject matter at hand, or maybe she was being funny and I was just too much of a stick in the mud to recognize it. It's hard to hear jokes about heroes, right? I mean they ARE the Founding Fathers, don't you know?

Anyway, the more serious tone is not enough to keep me from recommending this book - it's good! - but if you've never read Sarah Vowell before, start with something else, like Unfamiliar Fishes or Assassination Vacation.
Posted by Stephanie Pounds at 10:27 AM