The Upside and a Book

Did you know my son, Brian Pounds, was on The Voice this season? Of course you did. I've told everyone I know and even a lot people I don't know. 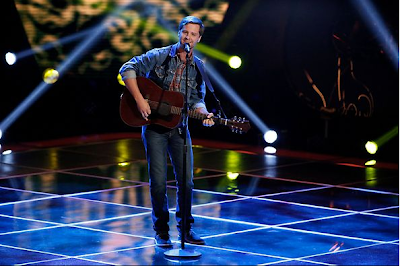 I am so, so proud of Brian. He's worked very hard for this. But I'm also proud of myself. Why? Because this whole process has been going on for about a year, and I've kept the secret that long! I know, right? 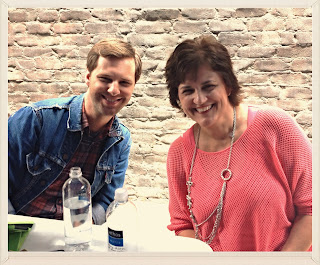 But now I'm willing to spill the beans. Ok, not all the beans. I'm still under a $5 million confidentiality agreement, but maybe just a couple of beans won't matter. Especially when they're pretty funny.

It was the day of the battle rounds. I had flown in to LA the day before and hadn't slept that much, so I was up early to get dressed. I was wearing this brand new turquoise top I bought at Soft Surroundings and a pair of white sailor pants. You know--the kind with a flap in the front with a column of buttons on both sides? I hadn't worn them in a long time, but I remember thinking the last time I wore them how comfortable they were, and this day I had enough on my mind that I wanted to be comfortable. (Note: Clothes matter in this story so pay attention.)

We arrived at the studio and we had a bit of a wait while all the contestants got in makeup and costume. I spent that time getting to know Stephanie Anne Johnson's grandma and dad. You may remember seeing them on TV during the blind auditions. What sweet, sweet people! We chit-chatted about family and our kids but I know I spent a lot of time chit-chatting about Captain America and Miss C (aka the future Mrs Brian Pounds) because neither one of  them was there at the moment.

The night before poor Miss C had pulled an all-night shift at the hospital where she works as a nurse, and Captain America had arrived in Houston from a five-day trip. Both of them were in the air that morning frantically trying to make it to LA before Brian faced the judges.

Captain America landed in LA first, but he had to wait for Miss C's plane to arrive because they were sharing a van to the studio. Miss C texted me that she had made it as far as Dallas, but her plane was an hour late. She was pretty sure she wasn't going to make it to LA on time, but she was going to try anyway.

And so with my stomach in knots already, I just tied another one in there and kept my fingers crossed that they would get to the studio in time. I kept calling Captain America to find out if his situation had changed. I was talking to the producers to see if anything could be done. I was checking FlightTracker about every 3 minutes to see how much closer Miss C's plane was.

And just about the time Captain America called me to say that Miss C had landed, I heard them call my name for the van to go to the set. I knew it was going to be close. Very, very close.

Stephanie Anne's folks and I boarded the van, drove over to the set, and they led us to the green room. It really wasn't green, though. It was just a small area divided by thick black curtains from the rest of backstage with about 12 folding chairs for anxious families to wait their turn. One by one they would lead the families out, and we could hear cheering, and the band playing, and then more cheering and sometimes even more cheering. And as I knew my turn was coming closer and closer, I kept texting Captain America and Miss C to find out how close they were. And Stephanie Anne's Nana and dad kept encouraging me with smiles, assuring me that surely they would make it.

As I sat there I would have one cold tingle run down my spine as I worried whether Captain America and Miss C would get there on time, and then I'd have another as I realized in just a few minutes Brian would be on national TV singing in front of an arena full of screaming fans. And another as I realized I was going to have to walk into that same arena. And then I would wonder if Captain America and Miss C would get there in time, and the cold tingle circle would start again.

Then the producer pulled back the curtain and said, "Brian Pounds family?"

I stood up, gulped, gave a weak smile to Stephanie Anne's family, and immediately started doubting my fashion choices for the day. It wasn't the turquoise shirt from Soft Surroundings or the white sailor pants from deep in my closet. It was my shoes. I was wearing high heels.

For the record, I am not one of those women who can rock high heels. I am a flats kind-of girl. In fact, I work from home, so most of my life I am barefoot. To be sure, each Sunday I put on heels and head for church, hoping that God recognizes that the effort it takes for me to stay upright is a sign of my true devotion. But Sunday or no, every time I wear heels, I feel like I've strapped on a pair of mile-high stilts. Add to that I've got lousy knees, and you see why I'm doubly dangerous.

When I put on my heels that morning, I thought that they would make me look a little more like a fashionista (Stop laughing! Right now! Every last one of you!), but I had grossly underestimated how wobbly my knees would be walking into that arena. I took a few steps toward the producer, and then a few more, and slowly made it to the other side of the curtain.

"This way," she said and pointed to a set of stairs. Yep. Stairs.

I don't even do stairs well in flats.

I stepped up and I made one riser and then another and eventually I was on the landing. I turned a corner, raised my eyes to look through the tunnel to the arena of screaming fans, and stopped. I was standing on glass--or something that looks very much like it.

Check out this guy walking through the same tunnel. See what I mean?!? 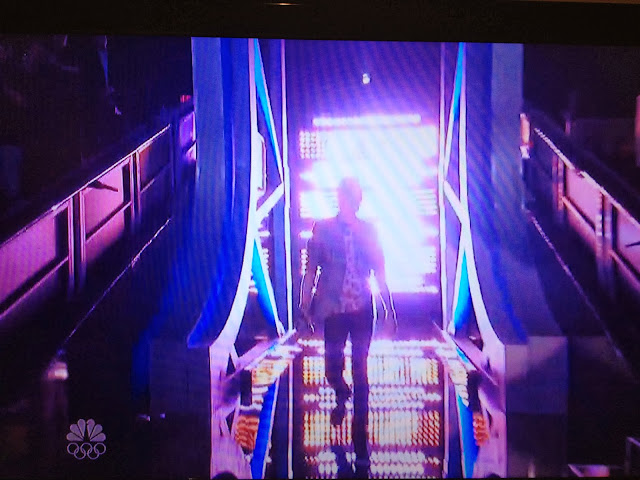 At this point I've got serious visions of Stephanie Pounds starring in Bambi on Ice. I took one step, wishing that I had one of those long poles that the Flying Wallendas use. I took another step, and I gained a little confidence, and I was beginning to believe that maybe I could actually make it.

And right at that point. Right then, TWO BUTTONS DECIDED TO POP OFF MY PANTS!

I kid you not.

One of them was captured by the turquoise blouse from Soft Surroundings, but the other skittered across the glass floor. In a rush of adrenaline and stupid luck, I raced after it, scooped down to pick it up, and stood up straight. I was still upright.

So now with my elbows plastered to my waistline and my hands out for balance, I shuffled into the first row of fans and took my seat.

The producer smiled at me, oblivious to the drama that had taken place behind her on the glass, and asked, "It's just you, right?"

I looked around to see if by any chance Miss C and Captain America were running through the tunnel, but there was no sign of them.

"Ok, this is Sam. He's going to be the camera man shooting you through the performance."

I looked over and smiled at Sam and his camera, which was about 2" from my nose.

"Hi," Sam said, "I'm just going to spend a minute here getting the lighting and focus right. I'm going to be right here and have this camera on you the entire time."

"Now when your singer comes out...what's his name?"

"His name is Brian Pounds," I said, and I turned my head to the crowd behind me. "We're yelling for Brian!"

"Ok, so when Brian comes out we need lots of energy."

"Are we going to have to stand up?" I asked.

Right then, just for a moment I thought to myself, 'Self, you are about to drop your drawers in front of several million people.' Then I looked beyond Sam and smiled, 'But Self, Adam Levine is sitting right in front of you, so maybe it won't be such a bad deal after all........No, no, no, no, no! It will be a bad deal. A very bad deal.'

The producer yelled, "I need you guys right there to fill in here on the front row," pointing at some kids in the row behind.

Three or four people jumped up and filed into the first row. The pretty little girl who ended up sitting right next to me smiled and asked, "Are you excited?"

"Of course!" I said, "And I've got a secret I'm only going to tell you. I just popped two buttons off my pants on my way out here. If I stand up and my pants fall to the floor, your job is to pick 'em back up for me. Got it?"

She gave me this puzzled look for just a second, and then burst out in laughter. "Yeah, got it!"

Then I heard Carson Daley say "....Brian Pounds." I jumped up, my elbows still plastered to my waistline trying to keep my pants aloft, all the while clapping and screaming like crazy. Think a trained seal at Sea World ork-orking for food and you've pretty much got the picture. And all the while the girl next to me kept doing double-takes to make sure I was still fully clothed. We sat down and a few seconds later the band started playing and the entire place--sans me--rose in one giant swoop.

I tried to show as much energy as I could in a seated position. I bopped my head, and I clapped and screamed. It was all so exciting--even from my chair--and before I knew it, it was all over and they were shuffling me out. I had made it backstage with all my parts still properly covered.

The producer led me around a corner and there were Captain America and Miss C just coming in the door of the set. They had missed it by about 2 minutes.

Of course at that moment I wished that Brian had won his battle, and I also wished that Captain America and Miss C had been 10 minutes earlier, but I was so proud and I'm still so excited. So much good stuff is happening for him right now. The upside is, he'll be known for his music and not for being the guy whose mom lost her pants during that one episode on The Voice. This is a good thing. Trust me.

But wait, you say. This is supposed to be a blog about books.

So here is a skeleton that I made just in time for Halloween. 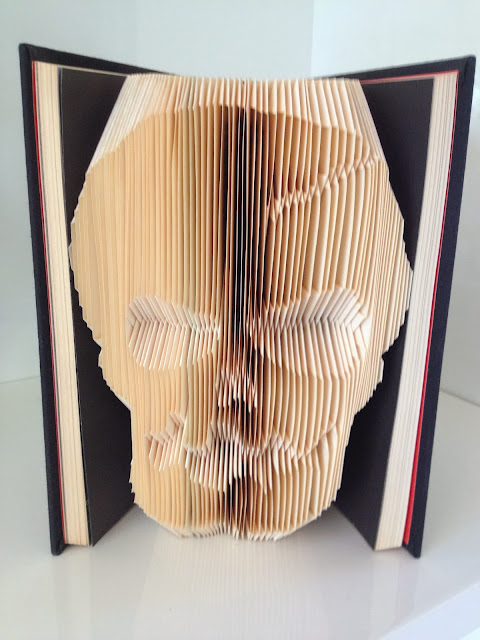 Posted by Stephanie Pounds at 8:38 PM