Book Review: The Emperor of All Maladies

A couple of months ago if someone had used "page-turner" and "cancer" in the same sentence, my first thoughts would have been of Love Story or Brian's Song, tearjerkers that, by the end, left me in a big puddle of mush. I definitely wouldn't have thought "non-fiction, written by a doctor," but that is now the case after having finished The Emperor of All Maladies, by Dr. Sid Mukherjee.

I chose the book because it won all kinds of awards, including the Pulitzer, and was on everyone's best book list back in 2010--and deservedly so. This was one of those books that after every chapter--and sometimes even during--I'd turn to Captain America and say, "Did you know...?" or "Let me read you something."

The book is a history of cancer--where it first shows up in literature, how doctors have treated it (or not) over the centuries, how we've tried to prevent it, and how we've tried to figure out what makes it tick. Mukherjee does a masterful job of weaving all these long story lines together. Like a good novel each sub-plot had me going until he would reintroduce another and that new one would be just as riveting.

Mukherjee brings two things to the book which make it immensely more readable. The first is his ability to describe difficult scientific concepts in similes that even a do-do brain like I can understand. I felt I was able to follow all the experiments and the science and kept turning the page to see what the result of each new tack would be. The other is his personal story as an oncologist as he relates stories of the patients that he and his colleagues treat.

There's blood, mystery, politics, science, tears, hope and hope dashed. All the elements of a really good book, and this is one. Highly recommended! 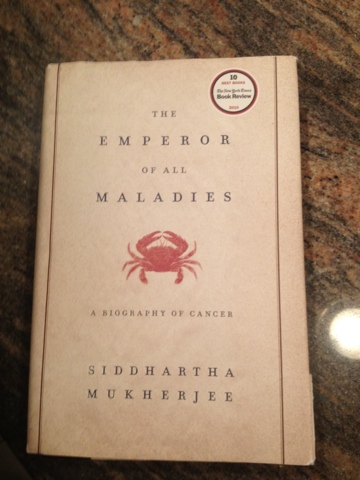 Posted by Stephanie Pounds at 6:45 PM